This list is intended to provide a consolidated reference to a series of posts, messages, and other observations as to the many Verizon Wireless cellular and data drops on Washington DC's metro rail system.

In the past, posts made to a variety of cellular groups and e-mail to the Wireless Notes page have indicated that the Verizon properties (Bell Atlantic Mobile, GTE, Airtouch, Primeco, and some ex-AllTel l properties) offer (based on drive tests and empirical experience) a generally higher level of service, fewer drops, and superior voice quality as compared to other wireless carriers (AT&TWS/Cingular, Sprint/Nextel, et. al.).

However, unfortunately the high degree of reliability and well-planned/well-implemented coverage does not seem to be in evidence in Washington DC’s metro rail system. This potentially could be the result of Verizon Wireless functioning as the sole provide r of service within the metro rail system or as a result of their early attempts at implementing analog-based coverage and their failure to properly update their infrastructure so as to accommodate the vagaries of digital coverage subsequent to the discon tinuation of analog service in late 2007. As a result, there are numerous drops, fades and other problematic areas within the metro rail system which is uncharacteristic of Verizon’s above-ground surface, as was atypical of its performance in other underg round systems such as San Francisco’s BART, the East River and Hudson-Pennsylvania railroad tubes, the Baltimore rail tunnel and others.

The map below is intended to be a visual companion to the Verizon data droplist and the Verizon cellular droplist with respect to drops specifically within Washington DC's metro rail system.

The criteria for a drop being "worthy" :) of getting posted are:

Disclaimer/Note: The authors have nothing to do with Verizon or DC Metro other than as customers. While we will try to keep the map and associated Verizon Wireless droplists current, you should test them out for yourself and not use this as a dispositive and authoritative source of information as to Verizon's cellular and/or data service (or lack thereof) with DC Metro. In other words, these are just our and/or other's observations -- we try to be accurate, but we make no represe ntations other than what we have observed (and if others notice we are wrong about a given drop, please mail us so we can test the drop and modify the list accordingly.) 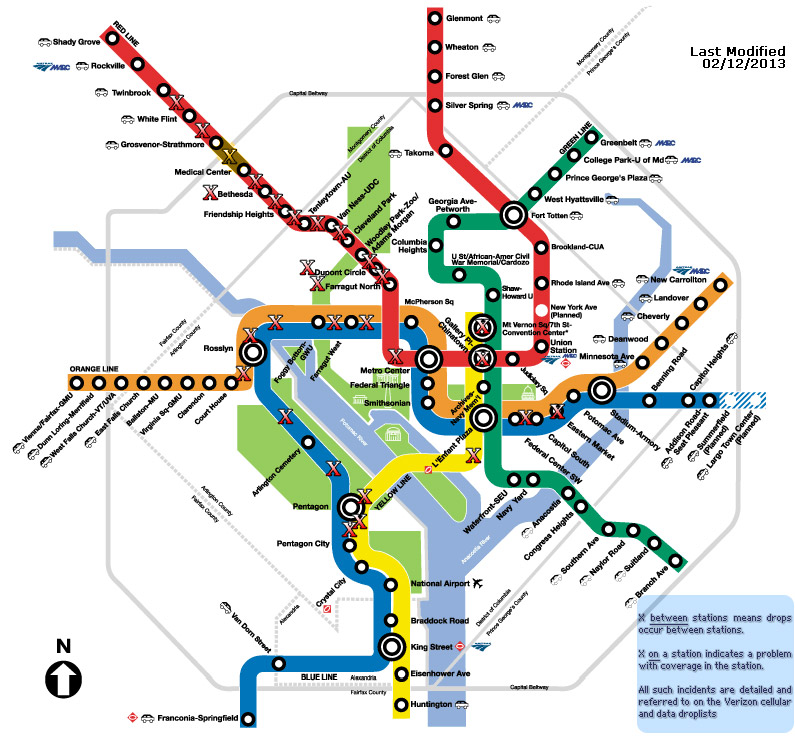 We may be reached via:

Back to Main Wireless Notes Page